Seth Mnookin’s upcoming book The Panic Virus couldn’t deal with more timely subject matter. The book discusses how vaccine opponents have used the media to spread their message of panic regarding the link between autism and vaccination, despite no scientific evidence to support them.

In 1998 Andrew Wakefield, a British gastroenterologist with a history of self-promotion, published a paper with a shocking allegation: the measles-mumps-rubella vaccine might cause autism. The media seized hold of the story and, in the process, helped to launch one of the most devastating health scares ever. In the years to come Wakefield would be revealed as a profiteer in league with class-action lawyers, and he would eventually lose his medical license. Meanwhile one study after another failed to find any link between childhood vaccines and autism.

However, just this week, the British study that linked autism to vaccines has been found to be a fraud.

Yet the myth that vaccines somehow cause developmental disorders lives on. Despite the lack of corroborating evidence, it has been popularized by media personalities such as Oprah Winfrey and Jenny McCarthy and legitimized by journalists who claim that they are just being fair to “both sides” of an issue about which there is little debate. Meanwhile millions of dollars have been diverted from potential breakthroughs in autism research, families have spent their savings on ineffective “miracle cures,” and declining vaccination rates have led to outbreaks of deadly illnesses like Hib, measles, and whooping-cough. Most tragic of all is the increasing number of children dying from vaccine-preventable diseases.

The Panic Virus is in stores January 11th. 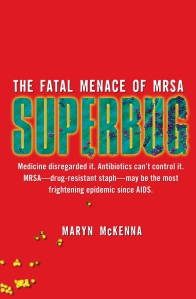 I almost never get sick, and I’m pretty careful about the food I eat (with today being the exception as its “free pastry day” at Starbucks). I prefer to make things myself – if I want a cookie I get out my trusty wooden spoon and start at it, if I feel under the weather, I drink a gallon of water and quadruple the garlic in everything I make. It seems pretty obvious then that I would gravitate to a book called Superbug.

Superbug chronicles the life and history of MRSA – methicillin-resistant Staphyloccocus aureus – a supremely sneaky pathogen, that’s simply put, smarter than us.  MRSA is a strain of staph (one of the most common bacteria on the planet) that has grown resistant to almost all the antibiotics used to treat infections. MRSA used to be thought of as a problem that was confined to hospitals, infecting only the terminally ill and immunocompromised, but over the last few years, we have seen a rise in community reported cases, and more surprisingly, agriculture related cases. In 2006, over 2,300 patients in Canadian hospitals died from complications related to MRSA infections; there were 5,787 newly identified MRSA cases; 3,561 healthcare-associated cases; and 893 community-acquired cases.

Written by award winning science and medical writer Maryn Mckenna, Superbug looks at the cause of MRSA resistance, the overuse of antibiotics in commercial agriculture, and what that means for our future health. Drawing on more than 200 interviews and more than 1,100 scientific articles to tell MRSA’s full and never-told story, Superbug is the story of how we created the conditions that allowed MRSA to emerge in the first place.

It seems timely then for me to talk about this book, as yet again there are reports of listeria contaminations in the commercial food products many of us eat without thinking. One of the most interesting parts of this book is McKenna’s discussion of commercial farming, and the link between antibiotic resistance and the cramming of livestock into industrial farms where drugs are essential to keeping meat prices cheap. It seems like we’re fighting a losing battle, either we get sick from listeria, or we get sick from MRSA.

So, before you go to the doctor for that flu you think you might have, take a step back and ask yourself if you really need antibiotics. Better yet, pick up a copy of Superbug, it’s a lot more interesting than reading the New England Journal of Medical whatever, and it’s probably not covered in the same viruses as those tabloid magazines at your doctor’s office.

So we’d like to share an amazing new work of fiction with you.  I just finished reading Still Alice and was blown away.  This is a novel written from the point of view of a Harvard cognitive psych. professor as she descends into early-onset Alzheimer’s.

The author, Lisa Genova is a Harvard PhD and writes this fiction as though she has lived it herself.

Email me at claire.laplante@simonandschuster.ca to win an advance reader’s copy.  The first person to email with “STILL ALICE” as the subject and their mailing address in the body wins.